The Growth of Urban Fashion

Much like the hip-hop culture it reflects, urban fashion has evolved and matured since its arrival in the early 1980s.  Hip hop was a new musical innovation at that time, and the artists began to emerge as stars in their own rights.  As the fan base grew, so too did the entire genre.  As with any other subculture, this one developed its own unique style, this became known as “urban fashion.”
.
Urban fashion has become its own industry, with dedicated fashion designers and celebrity spokespeople, although it did not necessarily start this way.  In fact, the first signs of urban fashion in American culture trace their roots back to sportswear companies like Adidas and Nike.  Pioneering rappers Run-D.M.C. even had a hit with their song “My Adidas.”  Early urban fashion was nothing if it wasn’t properly accessorized.  Hip-hop artists were famous for their oversized gold necklaces, athletic shoes (or “sneakers”), and a variety of signature hairstyles.
.
As hip hop claimed its legitimacy, the urban fashion it inspired began to change.  The oversized pants of rappers like MC Hammer became a fashion craze, as did wearing neon colors and backward baseball caps.  It’s easy to see the African influence when looking back on this period.  Artists like Will Smith, for example, wore a lot of green and gold with geometric patterns reminiscent of another continent.
.
Both the music and the fashion took a new direction in the mid-90s when gangsta rap came to prominence.  Urban fashion went from the highly shaped and styled looks of the 80s into more of a street appearance.  The overall trend was generally influenced by both street gangs and prison culture, the two of which were obviously somewhat intertwined.  The look often included a baseball cap worn to the side, extremely baggy and low-riding pants, and t-shirts or sports jerseys.  While the hip-hop artists themselves often dressed this way, some began to look for a more refined style.  Many started wearing double-breasted suits and dress shoes.
.
Urban fashion has always been closely related to the sports world, and despite the different styles that have come and gone, sportswear has never entirely left the scene.  Designers like Tommy Hilfiger have been extremely popular with the hip-hop crowd since the 90s.
.
In the 2000s, urban fashion began to expand into more mainstream culture.  The crossover had a variety of influences, but one of the biggest was the popularity of hip-hop mogul Sean Combs.  Both his music and his style have appealed to those outside of the traditional hip-hop culture.  Many hip-hop artists have followed suit and started their own clothing lines.  Russell Simmons’ Phat Farm and Jay-Z’s Rocawear have been two of the most popular.  Tools like Fashion Mogul Clothing Line Start Up Kit are available to help those who don’t have celebrity but do have great ideas turn those ideas into their own contributions to urban fashion.
.
Around this same time, the women of hip hop underwent a makeover of sorts, with much more glamorous styles emerging.  Lines like Baby Phat appeared to appeal to this female market.  Artists like Lil’ Kim have made a name for baring a lot of skin, but other female artists have chosen to go in a more conservative direction.  For both men and women, however, urban fashion still has a lot to do with accessorizing, and everything from flashy cars to “grillz” can be considered as a part of the style.  Urban fashion is very much about the glitz and glamour of living larger than life. 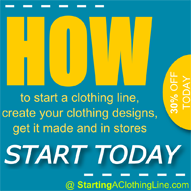